Glenn has thirty years martial arts experience, as well as experience in the health and fitness industries.

Having gained 4th Dan Black Belt in Kempo Karate as well as 4th Dan Jujutsu (Japanese based Jujutsu) Glenn has spent most of his life training and practicing the martial arts.

Not only trained in the Kempo and Jujutsu systems he has also trained in a variety of other arts and continues to seek out quality knowledge and skill where he can. He has combined this knowledge and associated skills with 10 years of Security and operational experience within the Prison system to further refine his understanding and skills.

Having begun training in Brazilian Jiujitsu to further develop his grappling skills he found it to a particle and beneficial martial art with a great life philosophy that he wanted to share with others. He began to integrate more and more BJJ into his classes eventually switching to the current format. In 2017 MVMA affiliated with the Infinity Martial Arts family so as to further develop he and his students skills under the guidance of the Infinity team.

Glenn continues to develop his understanding of the fitness industry by also engaging in various courses and is currently undertaking his Certificate 3 in Fitness as well as being a certified Punchfit trainer.

Alana began her BJJ journey in 2013. After several years of training she was ranked the National No1 female novice in 2015 for both Gi and No Gi, taking Gold in most major Australian competitions including three divisions at the Pan Pacific Championships. She continues to train and develop, competing and coaching MVMA students to achieve their best. 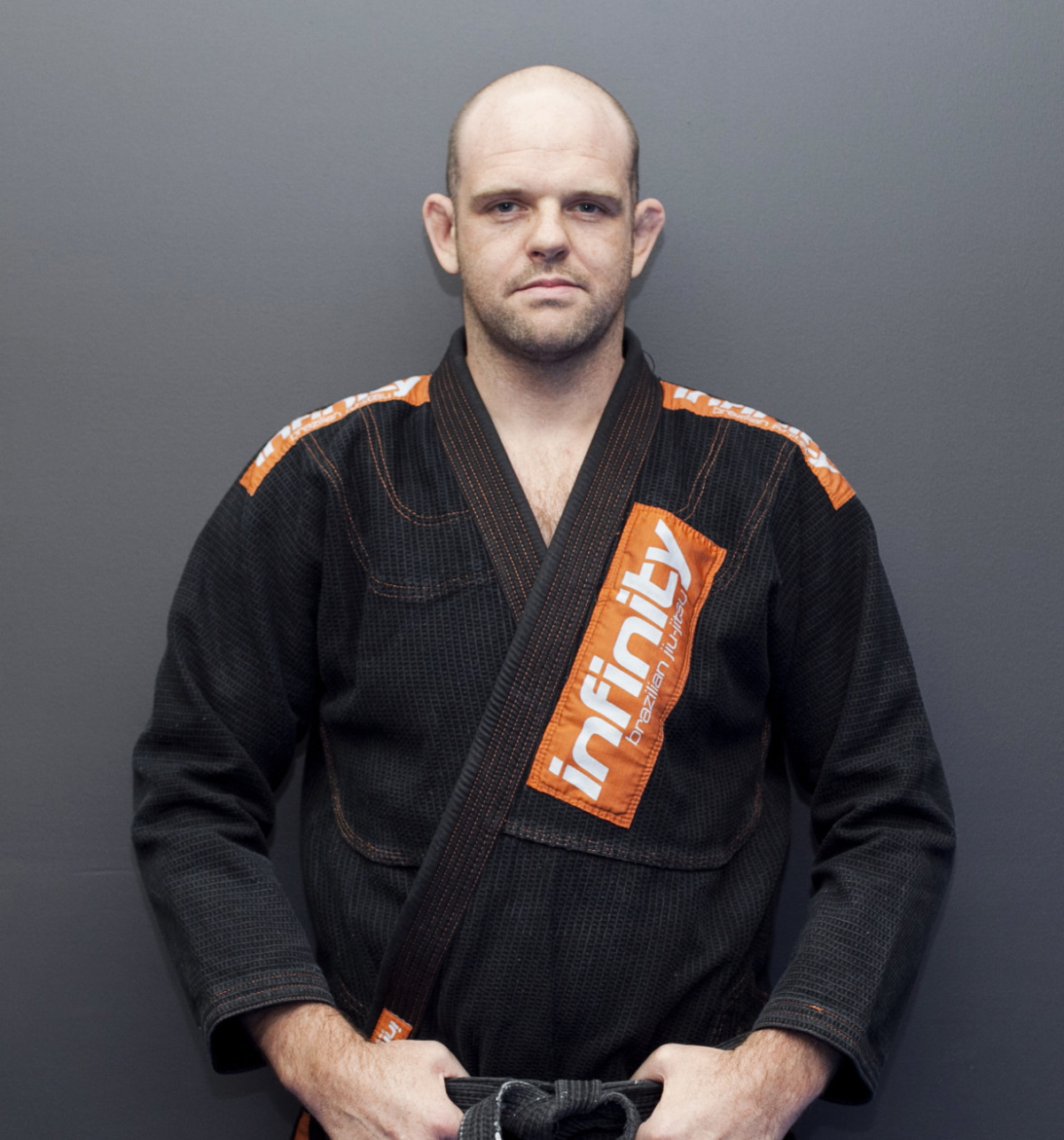 Neil began training BJJ in the mid to late 90’s under Chen Moraes and the Anaconda team. Due to the fact he lived in the North of England and most of the BJJ clubs at that time where located in London he would travel to London whenever possible usually at weekends with the goal of cramming in as many sessions as possible.
Although most of the biggest BJJ Academies where in London the sport was still very much in its infancy with people training all over the country out of old factories and in the back room of spit and saw dust weightlifting gyms, in fact the first place he ever trained at was a back room of one of those types of gyms where the classes where held on carpet and grapplers used to roll with old retro Judo Gi’s whilst wearing footwear or footy shorts and T shirts whilst still wearing footwear.
If questioned about the footwear they used to say things like “everyone should grapple in trainers and boots etc. because you don’t get into fights with no footwear on” ha ha they even used to hold sessions where they would come in Jeans or stuff they would go out on a night out in so they could test whether it would work in a real situation.
Eventually the area became luxurious when they received a donation of an old boxing canvas what they could throw on the floor and nail down, but looking back the dedication those early guys had was pretty extreme. That said it doesn’t mean there wasn’t any good grapplers produced in the North of England at this time, Judo and wrestling was very popular in the North of England with even the great Maeda travelling there many years previously to improve his skills. So in order to improve he set about finding the best grapplers he could in order to improve. It was around this time that he struck up a relationship with a group of guys that would go on to form the beginnings of BJJ in the North of England.
During this early period it was very difficult to gain respect for BJJ in the communities that where largely used to seeing combat as kicks and punches and even when they came across the areas that had a history in grappling it was usually a style of grappling that focused more on the takedowns and throws and so therefore had very little respect for BJJ, gradually they managed to gain respect through organised demonstrations and challenge matches which pited styles against styles, these meetings would take place in gyms and organized shows where rule sets where often very different from the rules we have today.
Examples of some of the people that formed the basis of the beginnings of BJJ in the North of England and for that matter formed a big part in the growth of BJJ in England as a hole where:
At this time he switched teams to Gracie Barra under the instruction of BJJ legend Mauricio Gomes who had been flying in and out of the UK for the past few years originally teaching in Birmingham and eventually setting down roots in London.
After a short while making the trip to London once again he was advised that if he wanted to compete and progress to the same standard as the Brazilians he would need to train in Rio, so it was then that with help of Mauricio Gomes who set up accommodation for him and Luca Atalla writer for Gracie magazine who came to collect him from the airport and show him around, that he began travelling to Brazil for long periods of time to train and compete, this continued on for 6/7 years, during that time he was very fortunate to be influenced by some of the legends of this sport because this was prior to the spread of BJJ athletes around the world it was not uncommon to see a sea of not just black belts but world champions on the mat at training every night.


During this period and after Neil was directly influenced by the following instructors and legends of our sport.

Carlos Gracie Jnr – Mauricio Gomes – Renato Migliaccio – Roger Gracie – Braulio Estima – Lucio “Lagarto” Rodrigues – Renzo Gracie – Ryan Gracie
____________________________________________________________________
Through this period the team in the UK began to grow, going from strength to strength, though this period Neil emerged as the dominant competitor for this team always punching above its weight taking home medals consistently from Europe’s Major Tournaments of the day.
It was also during this period that a very competitive and friendly rivalry developed between the north and the south. On one occasion Neil tells a story of a tournament organized by Royce Gracie where the weight divisions where completed and fighters had begun to compete in the absolute division after a couple of wins Neil found himself competing against another one of the fathers of BJJ in UK long time friend and rival Simon Hayes on completion of the match there was a major disagreement about the scoring which nearly resulted in an old style Gracie challenge match right in the middle of the tournament, Neil still laughs at the thought of Royce taking his shirt of and standing in the middle of the mat issuing his challenge, but that is how it was in those early years.
By the mid 00’s he was still travelling to improve his knowledge of BJJ and his comp record, but this time the location was America starting out in Los Angeles and travelling all over the contry finding the best training partners settling for long periods in New York at the Renzo Gracie academy and after that American top team based in Florida, it was in this period where Neil feels he learnt and improved the most the diversity of training allowed him to achieve more and understand far better how to pass this information on to others, this period came to a close after 2 of the high points of the trip the first being his performance at Pan Americans where he managed to take a Silver medal in the heavy weight Adult category it was extremely rare at the time to see anyone medal at these major events other than a Brazilian let alone some body from the north of England that started learning from a book training on carpet ha ha. The second highlight was when he received his brown belt form American Top team prior to leaving America.
On returning to the Uk things continued for a while as normal competing in events but now at much higher level as the number of overseas champions teaching in the UK was much higher and a second generation of home grown talent was beginning to come through however something was a little off this was still the day when there was a lot of tribalism in the Jiu Jitsu scene and the brown belt Neil received form American Top team was proving a difficult obstacle for his old team Gracie Barra to overcome so after some long conversation the decision was made to demote Neil back to purple belt, this made things difficult at the time regards competition as Neil had already competed and medalled in competitions as a brown belt.
As it turned out it was a blessing in disguise because it allowed him to focus on teaching BJJ and after a lot of pressure from students an MMA team was added to the already existing BJJ team.
The success of this MMA & BJJ team was almost instant with students going on to fight on all the major shows, against high profile opponents, this team has sporned fight teams that are still going strong today, under the guidance of former students like Neil Wain, Danny Mitchell, Scott Askham (All current or former UFC competitors)
____________________________________________________________________
With the Birth of his eldest son the decision was made to retire from competition and focus on teaching, some of his BJJ comp highlights are:

Neil felt the need at this time for a change of scenery and a fresh challenge so he decided to emigrate to Australia, where he immediately struck up a relationship with his now business partner Chad Wright, because they both had a strong desire to create a solid professional BJJ team that provided the opportunity for everyone to learn BJJ in a safe, convenient, family orientated environment they decided to create Infinity Martial Arts this was created in 2010/2011.
Neil is still the Head Instructor of Infinity Martial Arts. With over 20 years experience now in BJJ and is one of the pioneers of the British BJJ scene, Neil is also fast becoming known as one of the top instructors in Australian BJJ. With 7 full-time academies in Queensland and another 3 opening in the United Kingdom this July, Infinity is the most promising franchise opportunity for BJJ or BJJ/MMA clubs in Australia.
Powered by